This item has been sold, thank you

The bottom of the vase with a seal of the artist Hannya Kankei 般若勘渓 (1933).

The vase is in a very good condition.

Hannya Kankei (given name Hannya Shōzō) is a metal work artist from Takaoka, known for high-quality copper craftsmanship. He is the fourth generation of Hannya family foundry, manufacturing high-quality copperware since 1870. He studied metal casting under living national treasure Katori Masahiko (1899-1988). He has won many awards and prizes: thirteen times the Award of Excellence at the Kinkō Shinsaku-ten (New Works in Metalcraft), in 1969 exhibited for the first time at the Nihon Dentō Kogeiten (Japan Traditional Crafts Exhibition), winning the Nihon Kogeikai prize in 1973, Encouragement prize in 1982 and Asahi Newpaper office prize in 1985 at the Nihon Dentō Kogei Kinko Ten (Japan Traditional Metal Crafts Exhibition). 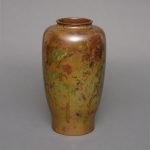 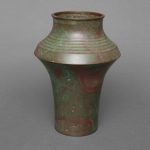