Tall hourglass shaped Kutani vase by Matsumoto Saiichi. The vase has an ocher yellow base with gold sprinkles at some areas and an allover brown drip pattern. Signed at the bottom by the artist. Including original wood signed and sealed tomobako. In very good condition, some color variation at upper rim and bottom ring. See photo’s. Shōwa period (1926-1989).

Matsumoto Saiichi (also romanized as Saichi) was born in 1930 (although year 1920 is also erroneously mentioned). He hails from famous family of potters, his father Sahei and grandfather Sataro were well known Kutani potters. He graduated from Kanazawa Institute of Art, and afterwards spent some time studying at national Ceramics Research Institute in Kyoto. His work was first accepted in Nitten in 1952, and Tokyo Government purchased that piece. He was awarded grand prized at Nitten in 1985 and 1988. He exhibited, and won awards at Asahi Togei Ten Ceramic Exhibition, Kofukai-ten and Kutani Dento Togei exhibits. His work is in collections of the British Museum and Ishikawa Prefectural Museum of Art, among others. 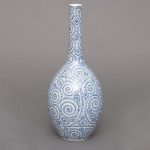