Attractive heavy stoneware vase with a glazed double-sided grisaille design of a grasshopper 飛蝗 (batta) typically rubbing its legs, making a chirp sound. He is sitting on a blade of grass idyllically in front of a white waxing moon . The grass design on a grey mottled base continuous on the sides.
The vase is of cylindrical form, with broad shoulders and inverted conical shaped mouth.

Sealed at the bottom by the artist Motohashi Tsutomu 本橋勤 (1948). Born in 1948 as the third son of Gyokusai Motohashi, holder of important intangible cultural property of woodworking. In 1970, he became a disciple of 22-year-old Koichi Tamura. When he was 32 years old he built a kiln in Chichibu city, Saitama Prefecture and became independent. From here on he displayed his works at many different exhibitions, like: 1980 – The Japan Traditional Art Crafts Exhibition, 1984 -“Ichidokai” exhibition held at Nihonbashi Takashimaya, where he later had a solo exhibition in 1994 and 1996.
In 1984 Motohashi presented a pot to Her Imperial Highness Princess Chichibunomiya.
And when he was 42 years old, he became a regular member of the Japan Kogei Association.

Including original signed and sealed tomobako 供箱 (storage box) and Japanese leaflet about the artists endeavours. 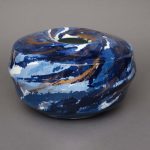 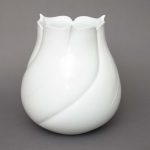 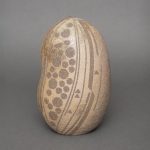 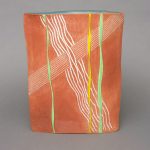