Nice and large Chôsen-karatsu-ware 朝鮮唐津焼 (Korean karatsu) brown stoneware bottle vase with a lovely craquelé dripping glaze in shades of blue and white. It was probably used to store sake.

Chôsen-karatsu-yaki – This particular type is created with an iron glaze and an ash glaze simultaneously. The two would mix and melt together under the fire – and this is fun to watch. Commonly, the darker iron glaze is applied first to the pottery, and then the milky white ash glaze is later poured slowly from the top. 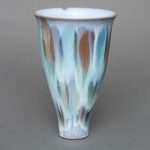 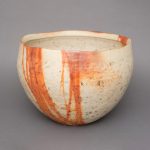 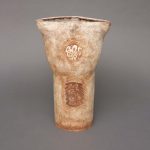