Goro Suzuki has had a long career from his start as a production potter over forty years ago to his present status as a highly revered master of ceramic arts. His work is widely collected both in Japan and throughout the world and is included in the collections of the Los Angeles County Museum of Art and the Marer Collection, Scripps College, in the United States; the Seto- city Culture Center and the Meito Art Museum in Japan; and the Hetsens Museum in Germany among others. He has been the recipient of a number of awards including most recently the Japan Ceramic Society Prize in 2001. In addition he has served as a Visiting Scholar at Cranbrook Academy of Art, Michigan, andd the Rhode Island School of Art and Design.

Suzuki Goro is noted for his work in the traditional Oribe style. Rather than sticking rigidly to making copies of old masters, however, Suzuki employs an element of freedom in his work, including humor and passion. His work has been further broadened by assimilating the styles of other cultures; a trip to Los Angeles in the late 1960’s inspired his “Los Angeles Oribe chairs” – large, whimsical and a bit wobbly. Other pieces include folding screens, large tea pots, smoking pipes etc. Works of art became sometimes so large and heavy that the artist had to use a forklift and ladder to handle them. The artist has said that making such large works is like “…sumo-wrestling with my wheel.” 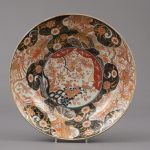 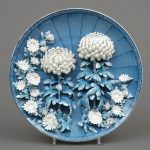