This item has been sold

Tsuda Eiju (1915-2001) studied under Tsuda Shinobu (1875-1946), who adopted him as his heir. He was accepted by the Japan Fine Arts Exhibition (Nitten) many times and received a grand prize in 1962. Eiju is known primarily for his bronze vases, but the animal theme is also a popular one with this artist; he is known to have made an incense burner in the form of a monkey and an okimono in the shape of a crane.
The crane comes with the original signed box. 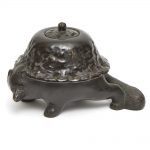