The tea-set looks as if made from lotus leaves and is inscribed on the outside with waka-poems signed: Rengetsu.
Each bowl is un-glazed on the outside and transparent glazed on the inside.
Meiji period (1868-1912).
The poems are taken from the only in her lifetime published work Ama no karumo (1875).
Kyoyaki stands for stoneware from Kyoto.

Read more about her interesting life and hardships in the book : “black robe – white mist” and read her poems.
Rengetsu (1791-1875), whose name translates as Lotus Moon, was a Japanese Buddhist nun whose tragic life inspired extraordinary creativity. One of a very few successful female artists in nineteenth-century Japan, Rengetsu was primarily a poet and calligrapher, but also excelled in pottery and scroll painting. 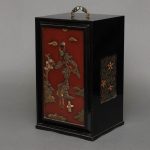