A rare Japanese mechanical lantern clock 和時計 (wadokei) with a double foliot balance. The mechanism of this clock works in such a way that it automatically switches from weight-driven over to two foliot balances at the transition between daytime to night-time, and at sunrise and sunset.

The engraved chapter ring with numbers according to the Japanese time indication. Surrounded by subtle engraved chrysanthemum flowers. This design continuous on the sides.

The knob of the bell is in the shape of a chrysanthemum flower 菊 (kiku).

The lantern clock rests on a black wooden pyramid-shaped base, in which the two weights are hanged. Both original weights are still present. The front of the base with a loose cover equipped with a sturdy ‘hirute’-shaped bail handle, and fitted with a copper applique with a foliage motif.

Such model clocks date around the late Edo-period, so first half 19th century.

For its age the wadokei is in a very good original condition with some traces of age and wear. Including three of the original scale weights, and several additional gears. Please note that one loop of a large weight is a bit loose. The mechanism of the clockwork has not been tested for its functionality.

A Japanese clock (和時計, wadokei) is a mechanical clock that has been made to tell traditional Japanese time, a system in which daytime and nighttime are always divided into six periods whose lengths consequently change with the season. Mechanical clocks were introduced into Japan by Jesuit missionaries (in the 16th century) or Dutch merchants (in the 17th century). These clocks were of the lantern clock design, typically made of brass or iron, and used the relatively primitive verge and foliot escapement. Tokugawa Ieyasu owned a lantern clock of European manufacture. (From Wikipedia). 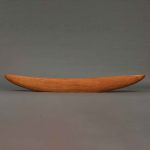 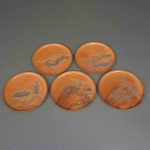