A very tall and exceptionally well-made Bunraku 文楽 doll, known in Japan as a Ningyô Jôrurui 人形浄瑠璃, depicting the beautiful character of Yaoya Oshichi, the green grocer’s daughter. Completely draped in an elaborate and colourful kimono with different flower and geometrical designs in shades of red, orange, blue and white, all complementary to each other, finished with black trims. Her hair in an elegant coiffure with different sorts of extravagant flower hair accessories. Her noble bright white head is painted with dignified features. The soft skin is created by applying repeated layers of the pigment called gofun, which is the refined powder of the itabo oyster (Ostrea denselamellosa).
She has articulated hands, and her left arm with a short post control.

Yaoya Oshichi 八百屋お七 (c. 1667 – 29 March 1683), literally “greengrocer Oshichi”, was a daughter of the greengrocer Tarobei, who lived in the Hongō neighborhood of Edo at the beginning of the Edo period. Her famous, though tragic story as an arsonist inspired several plays;

While taking refuge in a temple during a fire, Oshichi fell in love with a temple page. The following year, she attempted arson with the mindset that if another fire occurred, she would go back to the temple and see her love once more. However, she was caught in the act.
The magistrate at her trial, though knowing she was sixteen years old, asked her, ”You must be fifteen years old, aren’t you?” At the time, boys and girls under the age of sixteen were not subject to the death penalty, and since strict family registration systems were not yet widely implemented, confirmation of age by a bureaucrat was sufficient. Misunderstanding the magistrate’s intentions to try her as a minor, she replied that she was sixteen. At a loss, the magistrate asked her firmly again, ”You must be fifteen years old, are you not?” Not taking the hint again, she honestly stated her age as sixteen, leaving the magistrate no alternative but to sentence her to burn at the stake. (From Wikipedia)

Placed on a bamboo support.

In an excellent condition. Please look at the photos for a condition reference. 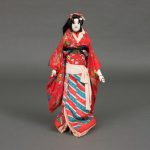 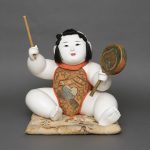 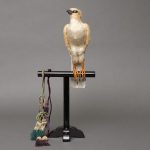