Ôkubo Hikozaemon was the favourite minister and adviser of the Shogun Iyemitso. He is wearing a brown kimono with a orange and white line design, above which a green kataginu 肩衣 (sleeveless ceremonial vest) with a white karakusa design.

The print is from the series ‘Sanshō awase sugata’ 三升合姿 (A Comparison of Sanshô’s Performances and Poems). There are at up to 27 other prints in this series.

Toshihide received his artistic name from his master, Yoshitoshi Tsukioka (1839-1892). He designed a wide variety of prints including actor prints, bijin-ga (prints of beautiful women), newspaper illustrations, kuchi-e (illustrations for novels) and senso-e of the Sino-Japanese (1894-1895) and Russo-Japanese (1904-1905) Wars. From 1887, like many of the woodblock artists who were trying to adapt to changes in art and publishing, he worked as an illustrator for books and newspapers, including a long stint with the Asahi Shinbun starting in 1897. 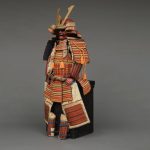 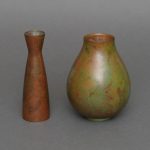 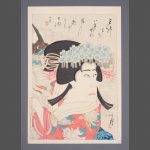 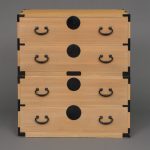