The ‘submissive’ dragon on the right has three-claws on each foot, which is commonly how dragons are depicted in Japan. However, if you look closely, you can see that the dragon on the left is painted with four-claws each. In Japan, it is believed that the more far-travelled a dragon is, the more toes it grows. Suggesting this dragon travelled all the way from China or Korea to Japan. Which also explains its position on the left screen, as it represents ‘the West’.

This work is painted on paper, and protected by a wooden frame.

Likely signed ‘Mika’ 美香 and sealed ‘Emika’ 江美香 by the artist in the lower left corner.

In Japan such screens are often used as a background for example vases with ikebana arrangements or other, in this case traditional tea ceremony objects. This screen is light in weight and can also be easily mounted flat on a wall and presented as one piece of art. Due to its smaller size, this screen fits perfectly in Western-style households. 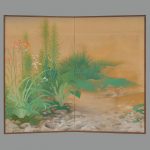 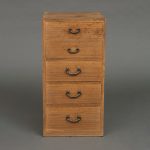 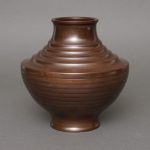 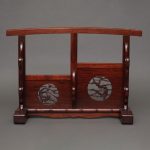