A set of two six panel byobu-screens with monochrome nicely detailed ink paintings. One depicting well and lesser known Chinese Immortals and Sages as the monks Hanshan and Shede reading a scroll; Li Tieguai breathing out his spiritual essence with his proper self in miniature; Liu Hai with his toad with three feet and Lu Dongbin with his sword crossing a river.

The other byobu-screen depicting Qin Gao standing on his carp with a scroll in his hand; the Buddhist arhat Panthala known in Japan as Handaka (or Handakiya) releasing a dragon from his begging bowl; Zhang Gongming with his tiger; Lu Dongbin with his sword crossing a river and Shu Ren, the crane-riding man, reading a handscroll, all pasted on a ground with sprinkled gold and gold flakes.

All paintings are attributed to Soga Shohaku (1730-1781) by the various names and seals used by him: Shōhaku;Jasokuken; Joki; Jokisai etc. 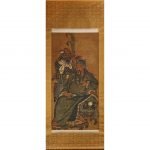