Screen with painting of Japanese ladies

Rare and nice oil painting of two Maiko (an apprentice geisha), on a two panel screen (byobu) by Tadao Morishima (1908-1972). (Please read biography below.) Two lifesize lady figures sitting against a off-white background, painted in nice soft but still contrasting colors. Looking at the top right corner it is probably suggested that the scene refers to the Tanabata (“Star”) festival. This continous painting is in very nice condition with some very very light traces of age. Mounted with a textile border with geometrical design in a strong wooden frame. On the bottom of the frame extra decorated with cutouts in fan shape. The panels on backside are made of textile and show signs of age and ware. This piece has a different more “modern” feeling. Signed and sealed: Morishima Tadao (1908-1972). In Japanese in the left lower corner and “western” in the lower right corner (Tadao Mo.)

Biography Tadao Morishima: Born in Sano-mura, Sennan-gun (currently Motomachi, Izumisano-shi) in 1908.
After spending his childhood in Kushimoto, his father’s hometown, he moved back to Izumisano. After graduating from the former Kishiwada Junior High School (currently Kishiwada High School), he studied at the design department of the Kyoto Institute of Technology (currently Kyoto National Institute of Technology) and took a serious interest in the world of Western painting. His painting began with the image of a person using a maiko as a motif, and gained national prominence when he was 26 years old, receiving the Imperial Art Academy Exhibition in 1934. Will Be On the other hand, he loves the scenic locations of the Morishima family, Saikazaki, Kushimoto Shiosaki and the coast of Shirasaki, and has left many works on the subject. In his later years, he began teaching studio classes at Sano High School (now Prefectural Sano High School), gaining respect from thousands of children taught by him. In his later years he pursued the beauty of the Japanese spirit and worked on ink paintings to express nature, flowers, Buddhism, Japanese architecture, haiku, kabuki, etc., leaving a very gentle and warm work.
He died in 1972 at the age of 64. In 2008, the Izumisano History Museum organized a memorial exhibition to commemorate the 100th anniversary, mainly displaying items donated by relatives.
(from the Izumisano City website). 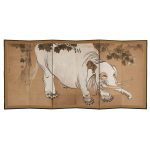 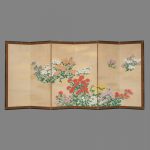 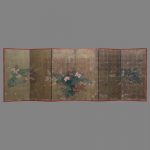 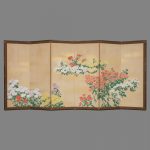