Magnificent low six-panel byôbu (雛形屏風) painted with a continuous scene of courtesans at the inner chambers of a Chinese pavilion, on a gold leaf background. The scene is very well painted with many lovely details, in the style of the Kanô school.

Across the panels many different courtesans are enjoying several activities while visited by their patron.
On the left two woman, who stand next to a blooming cherry blossom 桜 (sakura), are holding a red leash with on the other end two beautiful birds, flying high. A group of courtesans surround them and look up to the birds in awe. The courtesan at the back of the group is holding a cage with a similar beautiful bird, probably about to join the others.

Near the bridge walks the guardian of the pavilion surrounded by an entourage of courtesans to assist him in all his wishes while walking back. He holds the hand of a woman who wears a lavish kimono and a refined crown.
On the bridge they are met by a white dog, who pulls his master forward on his leash, and looks interestingly at the bird in the cage in front of him.
Across the lake some women hang out of the window and are looking at the spectacle.

A group of courtesans who play different instruments just left the grand pavilion and are on their way to great the procession.

The pavilion is surrounded by a nice well kept Chinese style garden, a flowing river and a mountainscape.

Parts of the top and bottom of this scene are overlapped by dense golden clouds.

The panels are bordered by two brocade silk mountings, a thin brown one, and a broad blue one with a floral motif. Protected by a black lacquer frame with its original hardware.

Due to its smaller size and because the screen is light in weight, the byôbu is very suitable to be mounted flat on a wall and presented as one piece of art.

The Kanô school (狩野派, Kanô-ha) is one of the most famous schools of Japanese painting. The Kanō school of painting was the dominant style of painting from the late 15th century until the Meiji period which began in 1868, by which time the school had divided into many different branches. The school began by reflecting a renewed influence from Chinese painting, but developed a brightly coloured and firmly outlined style for large panels decorating the castles of the nobility which reflected distinctively Japanese traditions, while continuing to produce monochrome brush paintings in Chinese styles. (From Wikipedia) 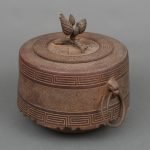 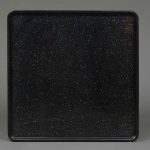 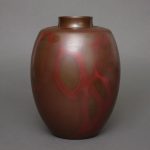