Some of the depicts locations are;
On the left on a mountain peak is the large kanji (Chinese character) 大 (dai; large) visible, this place is commonly known as Daimonji (大文字). During a festival in August this kanji is set ablaze, signifying the moment when the spirits of deceased family members are believed to be returning to the spirit world.
In the middle the imposing Kiyomizu-dera 清水寺, a Buddhistic temple in the east of Kyôto which is supported by tall pillars on the foothills of Mount Otawa.

On the lower right the Fushimi Inari-taisha 伏見稲荷大社 (a head shrine of the god Inari) is depicted with its famous mountain paths with red torii 鳥居 (Shinto shrine archway).

Sealed twice in the lower left corner with seals of the artist Kanô Tsunenobu 狩野常信 (1636-1713). The back with a more modern inscribed and sealed label, titling this screen ‘Famous places of Kyôto’ 京都名所 (Kyôto meisho), and with a seal to show that this piece is studied and approved by the Tenrankai 展覧会審査済 (a museum committee).

For a piece which originates some 310-360 years ago, it is in an extremely good condition with only minimal traces of age and wear. Which may suggest to a more recent touch up by the committee of inconspicuous high quality. Please take a look at the photos for a condition reference.

All these scenes are bordered by shiny dense golden clouds. The panels are surrounded by two silk borders, a thin dark brown and grey one, and a wide light brown and gold one. The screen is protected by a black lacquer wooden frame with its original protective hardware.

These kind of room dividers are light in weight and can also be easily mounted flat on a wall and presented as one piece of art. 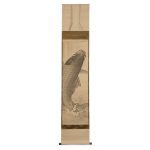