The basket is loosely woven with broad bamboo strips in a cross weave pattern. It is resting on a firm foot ring. The bamboo has a soft but warm patina contrasted by the dark brown spots, which is a beautiful specific to this type of bamboo.

The bottom signed Icchikusai一竹斎. Which is the signature of the award winning artist Tanabe Chikuunsai II 田辺竹雲斎 (1910-2000).

Including a separate bamboo segment vase. This cylindrical container can be used for flower arrangements.

The basket is in a very good condition. Please look at the photos for reference.
Heisei period.
Approx. size:
Height 40.5 cm, Diameter 29.5 cm.

Tanabe Chikuunsai II was the son of Tanabe Chikuunsai I and was based in the famous ikebana settlements Osaka and Sakai.
He was the second artist of the Tanabe dynasty to bear the name of Chikuunsai which means “Bamboo Cloud”.
In 1930 he became a member of the Naniwa Ranyukai group and in 1931 he became known as the Schochikuunsai studio and was accepted the same year in the 12th Teiten, the exhibitions of Teiten, Shin-Butten and Nitten in 1937.
On the death of Chikuunsai I, he assumed the name of Chiukunsai II. He changed his style, leaving the karamono baskets a bit heavy, for more open baskets such as In 1952 he received the Tokusen Prize and the Asakura at the Nitten’s 8th Exhibition, and in 1959 he won the Osaka Prefecture Arts Prize, and in 1981 the Japanese government promoted him to 4th place in Zuiho.
In 1991 he transferred his studio name to his eldest son, who became Chikuunsai III and took the name of Icchikusai. Remained active as an advisor to the Nitten, Nihon Shin-kôgei Bijutsu Kyokai Association, and permanent director of the Osaka Kôgei Kyokai Association. (From Mingei Gallery)

Ikebana is a disciplined art form in which nature and humanity are brought together. Contrary to the idea of floral arrangement as a collection of multicolored arrangement of blooms, ikebana often emphasizes other areas of the plant, such as its stems and leaves, and draws emphasis toward shape, line and form” (from Wikipedia). 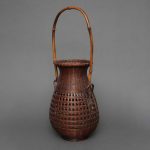 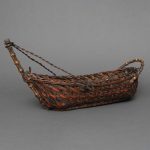 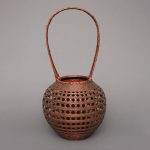 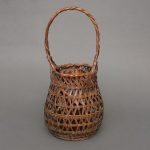