Well cast as a tengu in half-human, half-bird form standing atop a pile of leaves on a rounded square base with lappet and wave diaper to the sides and supported on four curved feet.

The tengu with one horn, a prominent crow’s beak, large wings, and scaly legs, wearing long flowing robes tied at the waist as well as a broad collar with a cloud design. In his lowered right hand he holds a feathered hauchiwa 羽団扇 (magical feather fan) with a reishi 霊芝 (bracket fungus) handle, and in his raised left hand he holds up a removable leafy branch bearing buds surmounted by a floral candle pricket. His face with a fierce expression marked by bulging eyes and thick, furrowed brows.

Tengu (Japanese: lit. “Heavenly Dog” or “Heavenly Sentinel”) are a type of legendary creature found in Japanese folk religion. They are considered a type of yôkai (supernatural beings) or Shinto kami (gods). In folk tales, the hauchiwa sometimes can grow or shrink a person’s nose, but usually, they have attributed the power to stir up great winds. 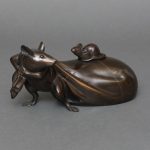 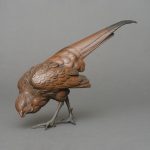 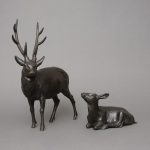