Unique and rare bento box with wakasa nuri lacquer, randomly incrusted with some mother of pearl (raden) flakes.
The bento box contains 5 trays and one lid. Inside of the trays are red lacquered.
Two trays are split in 4 compartments.

Wakasa lacquerware (called Wakasa-nuri in Japanese) is produced in the area around the city of Obama, Fukui prefecture. It is said to have originated in the early Edo period (1603-1868) when a craftsman serving the Obama domain (now the city of Obama), which controlled the region near Wakasa Bay, created a design depicting the beautiful depths of the sea (source: Kogei Japan). 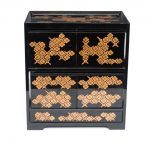