Set of two hexagonal Hokai each in two parts – the tops sitting on separate bases. Black lacquered lovely continuously decorated in goldleaf with branches of Bush clover (Lespedeza) and nicely detailed Japanese pine tree branches. In Japanese culture, the pine tree is known to represent longevity, good fortune and steadfastness. It is commonly linked with virtue and long life, even immortality. Bush clover (hagi), is a popular autumnal symbol, is associated with melancholy. Including original oriange cords and tassels. In nice original condition with some light signs of age and use. Hokai boxes are traditionally used in Japan to store and carry shells for Kai-awase game in Edo and Meiji Period. When shipped we will add a certificate of authenticity. End 19th century (Meiji-period). 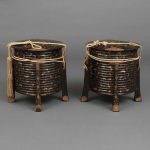