A red lacquered shrine with doors opening at two sides.

Inside is a “tile” of sun dried clay with at one side Benzaiten (Benten) and Shinto deities and at the other side the print of a hand.

According to one of the stories about Kukai, founder of Shingon Buddhism, he held on the seventh day of the seventh moon month of Tencho 7 (830) (the date is written on the index finger of the print of his hand) in the Enoshima Benzaiten grotto (today: Enoshima jinja) for the benefit of all living beings of this world a goma-fire offering. After this ceremony (which finds its roots in the homa-offering of Indian Brahmanism) Kükai himself impressed with his own hands an image of Bensaiten in the ash that was left of the fire while on the other side he left an impression of his left hand (tegata) together with that of his kao-seal (a seal with an abstract image).
On one side of the clay “tile” above is Benzaiten with eight arms sitting on a lotus throne. In each of her hands she holds a religious implement. Around and below Benzaiten (Sanskriet: Saraswati), the goddess of everything that flows (water, wisdom, music etc. and later also one of the Seven Gods of Fortune) stand the “Fifteen boys (jugo doji)”, these “boys” are the incarnations as a Shinto deity of a group of fifteen Buddha and Bodhisattva’s (honjibutsu); each of them can be recognized by the implement in their hands.
On the other side is the impression of the Kukai’s left hand with on the palm of the hand the name Kukai and his kao-seal.

As the characters on the hand are written in relief the text on the hand must originally have been written as a mirror image on the model before a mould could be made from the hand.
During the Edo period various Shingon temples sold these “tiles” as objects of veneration and for protection.

A damaged piece of clay impressed the same way as here and kept in the Enoshima jinja is said to be the original of these “tiles”. The tiles were made of clay mixed with ash left over of a goma-fire ceremony, one of the most important religious offerings of Shingon Buddhism.
Usually not much ash is left of a goma-ceremony so unscrupulous temples often mixed the clay with other materials and “goma ash (goma no hai)” became synonym with a “bad person (akunin)”. Kukai’s hand and Benzaiten and the “boys” are also copied in stone of which an example can be found in Ishiteji (Stone hand temple), the 51st temple on the Kukai pilgrims route in the Island of Shikoku on Mount Kumanoyama: here the same picture of the hand and its reverse site is cut on a one meter high stone stele. 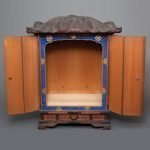