The outer folding doors have a nice even black lacquer layer and are equipped with attractive hardware with an engraved scrolling foliage motif. The doors are lockable by an ornamented sliding-lock with engraved scrolling foliage and an dharma chakra (wheel of the law) applique.
The inside of these doors with long gold lacquered debossed cartouches with double rounded corners. The outer panels are both equipped with the same dharma chakra applique.

Behind these doors, a pair of two-panel black lacquered folding doors with gold lacquer lattice work covered by grey mesh. These doors are equipped with a sliding lock as well.

Above them a gold lacquered wooden open work relief carved with a pair of shishi (temple lions) and chrysanthemum flowers.

The extensive gold lacquer interior of the butsudan has fine detailed hand-carved wooden shrine elements. Gold lacquer open work relief panels of the roof of the shrine are decorated with lotus flowers.

The inner shrine stands on two platforms, both decorated with gold lacquer open work panels with shishi and lotus flower designs. The centre one is lacquered in black and red as well. Underneath these platforms are three drawers with hiramaki-e 平蒔絵 (low-relief design) of blooming flowers and grasses. Hidden under, is a black lacquered pull-out tray.
Separate gold and red lacquer open work fences can placed around the shrine.

The butsudan stands on a separate base which has a wide drawer and a pair of sliding doors.
The drawer has maki-e of a wild river filled with ‘dharma chakra’s’, while the sliding doors are decorated with various gold lacquer flower crests. Behind the sliding doors there is a large space for storage.

When acquired new, in Japan these shrines are extremely expensive to buy!

The butsudan is in a very good condition with only some traces of age, wear and old restorations. Please look at the photos for a condition reference.
Taishô-period – Early Shôwa-period.
A Butsudan (仏壇, lit. “Buddhist altar”), sometimes spelled Butudan, is a shrine commonly found in temples and homes in Japanese Buddhist cultures. A butsudan is either a defined, often ornate platform or simply a wooden cabinet sometimes crafted with doors that enclose and protect a Gohonzon or religious icon, typically a statue or painting of a Buddha or Bodhisattva, or a calligraphic mandala scroll. The butsudan’s primary use is for paying respects to the Buddha, as well as to family members who have died. (From Wikipedia). 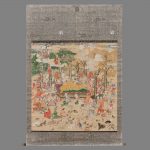 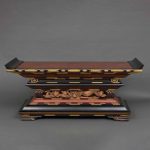 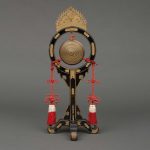