Large and impressive partially gilded red lacquer wooden sculpture of a shishi 獅子 (temple lion) with its mouth half opened and its left paw resting on a tama 玉 (ball). Its eyes are inlaid with glass. On its back lies a shishi-cub, looking curious in the same direction as its guardian. The tail is a well-filled tuft of hair that falls gracefully over each other in loose strands. This last part is a removable piece.

The shishi has a few traces of age and wear, but overall this statue is in good condition. Please see the photos for reference.

Shishi (or Jishi) is translated as “lion” but it can also refer to a deer or dog with magical properties and the power to repel evil spirits. A pair of shishi traditionally stand guard outside the gates of Japanese Shinto shrines and Buddhist temples. The Shishi (like the Nio) are traditionally depicted in pairs, one with mouth open and one with mouth shut. The opened/closed mouth relates to Ah (open mouth) and Un (closed mouth). “Ah” is the first sound in the Japanese alphabet, while “N” (pronounced “un”) is the last. These two sounds symbolize beginning and end, birth and death, and all possible outcomes (from alpha to omega) in the cosmic dance of existence. Others say the open mouth is to scare off demons, and the closed mouth to shelter and keep in the good spirits. The circular object often shown beneath their feet is the Tama 玉, or sacred Buddhist jewel, a symbol of Buddhist wisdom that brings light to darkness and holds the power to grant wishes. (From Onmarkproductions.com) 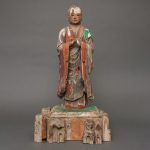 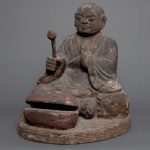