A zushi-shrine, black inside and outside containing a group of three polychrome wooden figures standing on rocks.
When Buddhism came to Japan there existed already an indigenous creed known as Shintoism or the Way of the
Gods.

During the Heian Period both creeds started to absorb each other, a process that is known as honcho suija: buddha and bodhisattva could manifest themselves as the original gods of Japan (kongen).

The three deities are on the right Uho doji (Rain Treasure Boy), on the left is Nandaryuo (Dragon King of Rejoice) and in de middle is a shinto-figure (myoshin).

So in this shrine we see a mixture of Buddhism and Shintoism. The very well painted the figures of the shrine are carved in a rather provincial style. The shrine probably comes from a local shrine where the villagers prayed for rain for their crops. 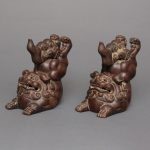 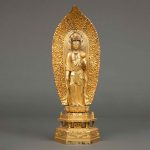 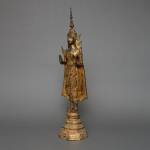